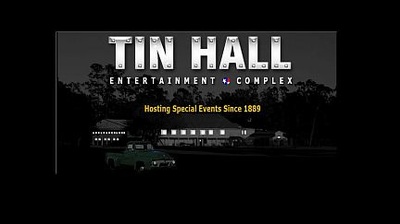 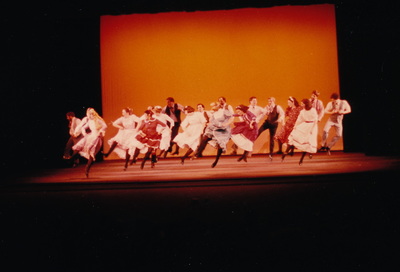 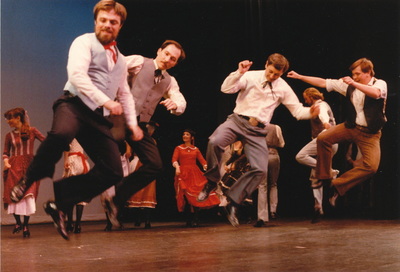 Traditional music has taken me and my wonderful husband, Rob, on some amazing journeys, for which I am very grateful, but it took a while before I was at a place where I could embrace all of this rich, vibrant, music.

I was born in Southern California, but my family soon moved to Houston, Texas, which is just 90 miles west of the Louisiana border.  This Texas/ Louisiana region was largely rural back then, and was rich with Cajun and Texas music, which provided the backdrop for my musical awakening.

I’m pretty sure that my love for folk dance and traditional music was born one Saturday night, back when I was 10 years old, and my parents took me and my older sister to a dance hall, by the most appropriate name of Tin Hall.  When a heavy thunderstorm came through, the sound was so loud on the tin roof of the hall, that all music and dancing just stopped, because nobody could hear anything.  I can still see those cowboys, through my 10 year old eyes, looking like giants with their high heeled boots, long skinny jeans and tall Stetson hats.  Now, make no mistake; these guys were the real deal; no rhinestone cowboys here.  About halfway up, from my perspective, on these cowboy giants, there was always a huge gold belt buckle, usually commemorating some rodeo triumph.

While we were at Tin Hall, one of my older sister’s admirers asked me to dance the Cotton Eyed Joe, no doubt to get my sister to notice him, but that was it for me.  Believe it or not, Tin Hall is still alive and well, after its opening in 1889.

The rhythms, movement, and just plain joy, made me want to be a part of this for the rest of my life.  Being 10 years old, though, meant that I had a lot of things to do, first; like figuring out a career with a regular paycheck attached, before I could follow that dream.  Happily, my other passion was science and math, so a 35 year career as a Chemistry teacher provided the non-nomadic life that I wanted, with summer vacations to keep playing music.

Fast forward 25 years, and my husband and I are performing for the U.S. Embassy in Budapest; he as a dancer and I as a banjo player with the Dunaj Folklore Ensemble.   We even got to meet Kitty Carlisle, who was visiting the Embassy.  From there, we performed in areas around Zagreb, Croatia. 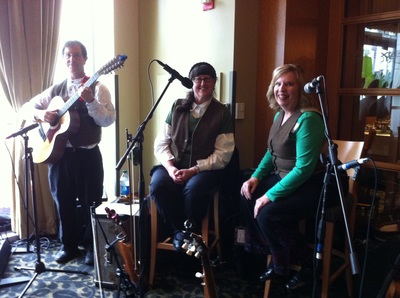 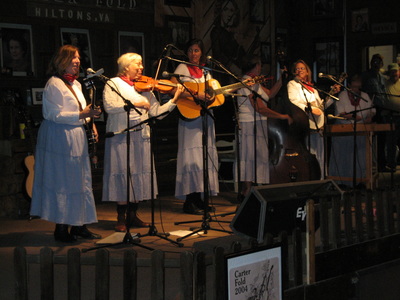 Lilies at the Carter Fold 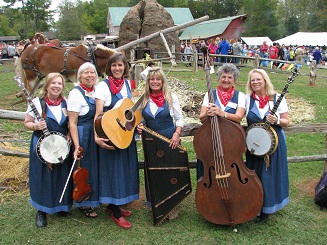 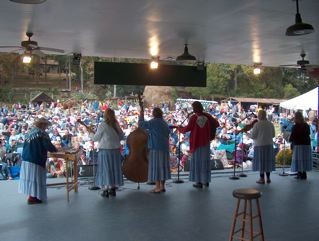 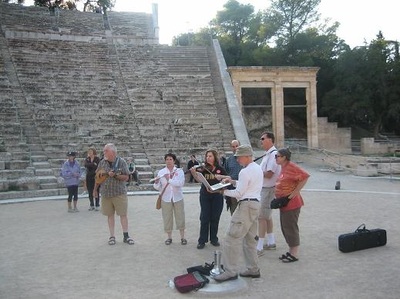 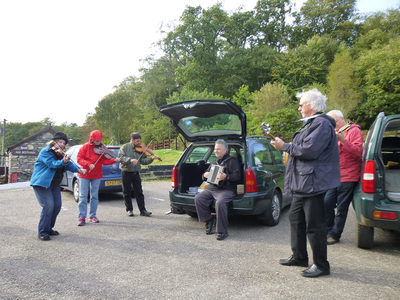 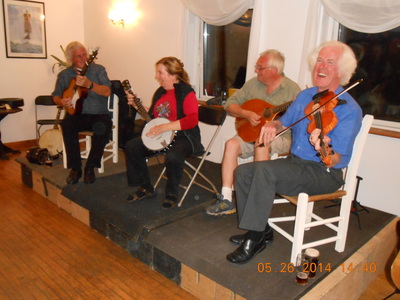 Men of Worth Pub Jam on Inishbofin in Ireland
Atlantic Crossing Band was one of the first bands that I joined and we are still performing together today.  Several years ago, we performed at the Lexus Club Restaurant, in Staples Center, which is home to the L.A. Clippers.  During a break, we opened a door to the Staples Coliseum, and were met with the most incredible wall of sound.  Those games are LOUD!

After that, I joined the Lilies of the West, an all-woman, Old-Time Band, and began going with them on their annual Fall tours to places such as the Museum of Appalachia in Norris Tenn, Silver Dollar City, in Branson, MO. and the World Folk Music Festival in Avoca, Iowa, and we are still touring to this day.

In 2008, I had the good fortune to join a folk band from Philadelphia, on a Greek tour, which needed a folk fiddler, and together, we played on the cruise ship and various Greek locations.  The high point of that trip was playing in the ancient coliseum of Epidarus, which features sound engineering so great, that the audience in the top rows can hear performers without amplification.

After that, my husband and I started going on Men of Worth tours, throughout Scotland and Ireland.  These musical tours have the usual tourist sights in the day, but feature playing in the pubs, until the wee hours, at night, for any interested musicians.  Ironically, it wasn’t always that easy to find Irish traditional music in Irish pubs because, in so many of them, the preferred music was American rock and roll. 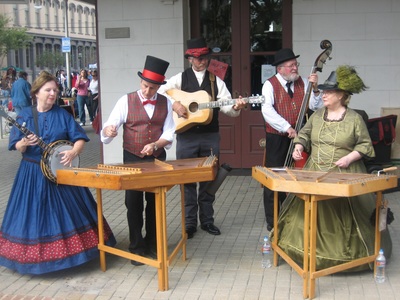 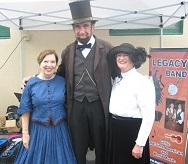 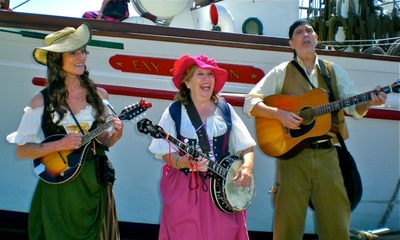 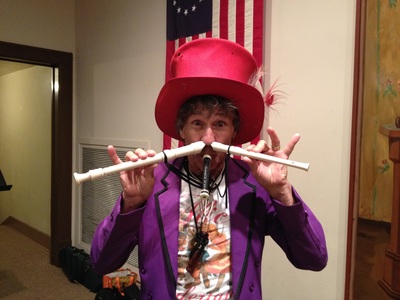 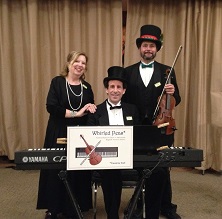 Whirled Peas All Dressed Up 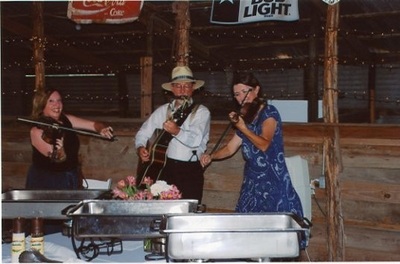 We met Peggy Carter in Tennessee and she invited me to join her in Galveston to play at their annual Dickens Festival.  It was 75 degrees that day, which is my idea of the right temperature for a festival.  Dickens' England would have been way too cold for me.

My friend, Barbara Gershman, and I have been performing as Legacy Band for several years.  We met Abraham Lincoln at a Civil War Reenactment.

For the past three years, two friends and I, performing as Reel Folk, have gotten to be part of the Tall Ships Festival at Dana Point, CA, which means we get to sing all of our favorite sea songs, sometimes on the deck of a Tall Ship.

Another group of friends and I perform together as the band, Whirled Peas, and lately, have been playing for themed balls, such as an Alice In Wonderland Victorian Tea Party and an Admiral Lord Nelson Ball.  Where else, but at events like these, could one encounter a performer playing Jesu, Joy of Man’s Desiring, on the double nose flute.

My sister and my extended family, live around the Austin, Texas area, which is a great place for any kind of music.  These friendly people recently invited me to join them for a couple of contra dance gigs, and extended an invitation to play with them, any time we are visiting.

So there you have it. No matter where you play it, traditional music seems to bring people together, who otherwise would never meet each other.

Music has been, and continues to be, very good to me!